On August 18 our athletes João Pedro, Jeimison Almeida and Auriane Loura were representing our team at the 085 Stadium of Muay Thai.

In spite of the nervousness for the debut our team achieved 100% of use, the boys managed to impose their games and they left victorious with knockouts in their fights. Our Brave Auriane, accepted the fight despite his opponent being 3 kg overweight, and even with all that difference showed that he has a beautiful future in the ring, winning the victory by unanimous decision.

We want to thank all those who collaborated directly and indirectly for our warriors to win this result, we believe that everyone has given their best in the fight and in training.

Once again Congratulations, Pedro, Jeimison and Auriane have represented with excellence our family Fighter Sport. Congratulations to Professor Márcio Valente, always showing talent in the sport! 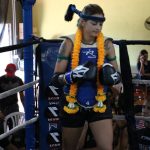