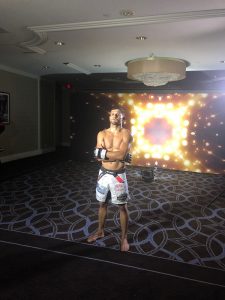 The student of GM Evilazio Feitoza will contest the belt in this arrow-fair, March 16, 2018 in Quebec in Canada. He will make the main fight of the TKO MMA and if he billed the international title, of breaking, he can stamp the passport to the UFC. This is the goal fighter from Ceará state Andrezinho Nogueira, who faces Canadian athlete TJ Laramie.

Andrezinho Nogueira, made his preparation in the United States, in the American Top Team, where he trained with Renato Moicano, athlete of his category. In the care of the Grand Master Evilazio Feitoza, he finished his training confident in its performance. “I am with the master Evilázio Feitoza, who is taking care of my strategy for the fight. From here (New York) we will go to Canada, where another American Top Team coach will join our group. I hope to do my best and bring this belt to Ceará.

Check out the TKO MMA card: