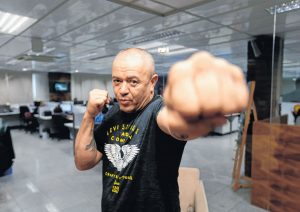 Between May 5 and 12, Grand Master Evilázio Feitoza will be in Maracanaú, Fortaleza and Juazeiro do Norte, where he will give lectures, as well as graduate and train young values ​​that practice Muay Thai and Kickboxing ( Foto: JL Rosa )

The day to day of an MMA fighter is not easy. It requires many trenes, dedication and, above all, persistence. Precursor of the martial arts in Ceará, the grand master Evilázio Feitoza is one of the professionals who understands better of the subject.
Living in the United States, where he teaches at the academy of former UFC fighter Matt Serra and black belt Renzo Gracie, he is on his way to Ceará, where he starts a series of seminars for lovers of sport. In Maracanaú (May 5), Fortaleza (days 6 and 7) and Juazeiro do Norte (May 11 and 12), Evilázio will be training and graduating young values ​​in the modalities of Muay Thai and Kickboxing.

In an exclusive interview with TVDN, the Grand Master detailed several issues. Among them, the transition from young Brazilian fighters to the international market. “Unfortunately, the basic work of these athletes here in Brazil still leaves a lot to be desired. Some fighters who are not yet 100% ready are put in an early stage to fight, and this ends up making it difficult or impossible for a career,” he said.

With international experiences in countries of Europe, the Middle East and Asia, where he has
lectures, the leader of the Fight Sport academy points out that the reality of most academies in Brazil is very different from the other centers as in the United States, where he currently works. “With the exception of the women (Cris Cyborg and Amanda Nunes), who are consecrated champions, we have no fighters promising at this moment in the UFC. We now have Rafael Dos Anjos, who will play for a belt, but it is difficult to find another name to bet on success, such as Anderson Silva and Wanderlei Silva did, for example ”

After several years of service and dedication to the MMA, Grand Master Evilázio Feitoza decided to move to the United States, where he has been working for three years. One of the essential points to opt for by the international market was the structure. According to him, the Brazilian MMA still has to evolve a lot, at this point in particular, to keep coaches and athletes. “I love Brazil, I love my land. I wanted to be living and working here, but working conditions can not be compared. This is what happens to our professionals. Out there and people are getting more and more demanded, and one time or another you end up going away. Lack of investment, “he said.

Feitoza works and lives daily with various personalities from the fight world. One of them is the Thiago ‘Pitbull’ Alves, one of the most experienced and respected UFC contenders. The grain master cites the victorious career of Ceará as a model for those who are starting. “Thiago has an excellent resume and this has made him one of the best. He knows how to do this transition work, from fighter to coach, at the right time, since his career is already consecrated. to play a belt against one of the biggest names in the MMA (Georges Saint-Pierre) and still acts at a high level, which is the type of winning career. ” In addition to being a fighter, Thiago Pitbull is one of the technicians of American Top Team, one of the most respected teams in the world.