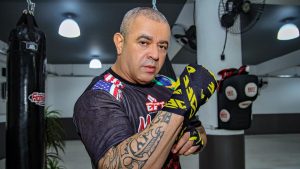 The situation is not easy in Brazil, nor in the great powers of the world. Living in New York, in the United States, the master of mixed martial arts, Evilázio Feitoza, lives a complicated routine in the city considered the epicenter of the coronavirus on the planet.

Cearense with a long history in the mixed martial arts, Evilázio revealed athletes like Thiago “Pitbull” Alves, a former UFC fighter and now coach of the American Top Team. He has a structured academy on Long Island, east of Manhattan, lives and works in the United States. He reports the drama and routine of living with the pandemic that haunts the world.

“My routine in New York has been with all the care and guidance given by health officials like; social isolation, leaving home just to do essential services, going to the supermarket wearing protection such as masks and gloves. I take care of my physical and mental health by doing some activities at home and others in the open air when the weather helps, but all with a lot of responsibility and awareness ”, pointed out the Ceará master.”

With several students affiliated to the Fighter Sport academy, which he owns, Evilázio Feitoza continues to guide fans of mixed martial arts, even at a distance, since the practice of video classes in the land of Uncle Sam is not new. “My private Muaythai / MMA classes are limited to video classes and thank God I have been working hard, especially because Americans are already used to this type of service. So it facilitates the relationship between teacher and student ”.

Exactly in the United States, the first step towards the return of sports was taken, through three UFC events, the largest MMA organization in the world, in the span of just one week. In the first of them, the Brazilian Ronaldo Jacaré, considered one of the greatest fighters of the event, tested positive for the new coronavirus and was removed from the card.

Despite this, the event was held, but with some attitudes that leave an air of concern in everyone, such as not wearing athletes’ masks in the eyes and referees during the fighting. “I believe that the moment of return was precipitated. Especially because the UFC influences the other organizations and nothing will prevent the return of any of them, since the largest organization of fights is promoting events. Ronaldo (Jacaré) may even have infected other people. It is a very big risk. I do not approve until the curve reaches a manageable index worldwide, ”said Evilázio.

While the health authorities struggle to control or find the vaccine for Covid-19, Evilázio, like other Brazilians who live and work in the United States, try to overcome the critical moment that all humanity is going through, always believing in better days, however unpredictable. “At the moment, I’m living one day at a time with the hope that this will all end as soon as possible. It is not possible to predict how soon the world will recover from all this impact caused by this pandemic. But we remain confident and with faith that everything will be all right! ”, He added.