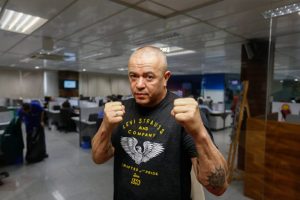 Evilázio Feitoza was in Fortaleza, Maracanaú and Juazeiro do Norte in May of this year, when he lectured and participated in graduations and trainings. (Foto: JL Rosa)

A chapter dedicated to the precursor of mixed martial arts in Ceará. This was the homage of former kickboxing champion Fernando Fernandes in his book, “Being Champion – In the ring as in life,” to Ceará’s master Evilázio Feitoza, who currently lives in New York, in the United States.

In contact with the blog, the Grand Master said that he is very happy for the homage and stressed that the recognition is the result of a work developed more than 40 years. “I feel very proud to have this recognition from a guy who has been seven times European champion and several times intercontinental champion! A legend of the arts world! Fernando Fernandes met in the 90’s and since then we have been close partners in the events, bringing the knowledge about the world of the fight to the four corners of the world, “he said.

Evilázio Feitoza has already discovered and launched several renowned fighters in high level competitions. Among them are Thiago “Pitbull” Alves (UFC athlete), Paulo Guerreiro and Andrezinho Nogueira, besides having worked with Gabriel Napão, Ricardo Freire and Assuério Silva, among others.

The book “Being a Champion – In the ring as in life” still has a chapter dedicated to the 1st Intercontinental Tournament I.S.K.A in Brazil, also promoted by Grand Master Evilázio Feitoza, in October 1994, in São Paulo. At the time, Fernando Fernandes won the title with a victory over Jose Ricardo Freire.

Always requested in several countries in South America, Europe, the Middle East and Asia to hold seminars, Evilázio Feitoza commented on the blog about the evolution and modernization of Muay Thai on the world stage. “With studies in martial arts, physical preparation, good nutrition and interest in self-defense, Muay Thai has made significant progress in recent years. The European style is the Modern style in my design and has had this evolution around the world. My concern as Grand Master alia to pass on to a student the mastery of his emotions, his aggressiveness and the philosophy of art. In our events it’s something I always want to reinforce, “he emphasized.